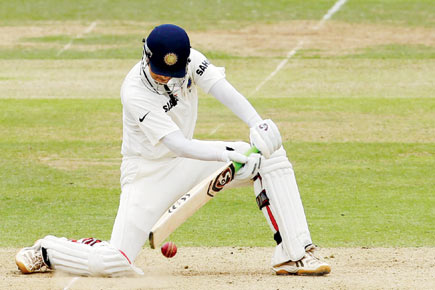 A wall is something we don’t give attention to, but it never stops giving its support and protection.
Maybe we sometimes fail to show our gratitude towards it. When it comes to Indian cricket we have a cricketer Rahul Dravid who is named as the wall. He was strong on the field, he provided support and comfort when required most. Like a wall, he was always there. Do we have forgotten him like walls around us?
But,

1. Do this replicated with the wall of team India?
2. Does his value is been overshadowed?
3. Do India will ever witness the wall team India had?
4. Do the gentleman of cricket got the reward for what he deserves?

Rahul Dravid is someone who is been valued more after his retirement. He is constantly working for the future of Indian cricket.
Many young players with unexceptional talent idealize him and getting trained by him. The overshadowed wall may not have got the exposure but his brilliant contribution to Indian cricket is paying unforgivable. We are blessed to witness the era of gentleman’s cricket.

Rahul Dravid is a name that we cannot neglect or negotiate if someone will ask us about a gentleman of cricket or if someone will ask you one name of a cricketer who played with utmost loyalty and spirit. In today’s fast forward cricket, Test cricket still finds its way and for India when it comes to test cricket Rahul Dravid is been pronounce as ” The wall of Cricket ” a wall that provides security, support and comfort even at the worst condition.

Can we say Rahul Dravid was as good as Sachin Tendulkar?

Let’s talk about the most classical and hardest form of cricket. Well before continuing with cricketing format maybe you will say no one was close to Sachin Tendulkar during his era. But there was one player probably in his era who was as good as him or maybe he was more or much better but somehow he is been overshadowed.

Rahul Dravid as a Test cricketer has 13288 runs in 164 matches and 286 innings. Whereas on the other hand god of cricket Sachin Tendulkar score 15921 in 200 matches and 329 innings. If one will look into figures it will tell supremacy of Sachin Tendulkar but if we will look into the matches both have played we may truly can’t compare both but can say Rahul Dravid was more skilled test cricketer that India ever have witnessed till the time.

Rahul Dravid may not have won the world cup for India during his cricketing career but his cricketing skills and experience won it for us. In 2018 under his coaching, Team India won its U19 world cup and all those rising stars idealize him. In 2020 Indian team played U19 final . Here even after his retirement still he is serving Indian cricket and nurturing talents for us. In 2007 we may have seen the worst performance of Team India in the ODI WC world cup 2007. But under his captaincy, India won overseas test series which is still a great achievement that the Indian team got.

we all preferred or always listen about someone being a gentleman. If you wanted to have an example of a true gentleman then you can get through Rahul Dravid’s lifestyle. He is truly a gentleman, not just on-field but on off-field too.

We all see many good and bad in our life. Rahul Dravid has also been through all this struggle but finally, he won it with his honesty. Maybe he was mostly overshadowed or underestimated cricketer that time but he is only a few of that cricketer now who have zero haters.